Whether or not Great White sharks occur in British waters is a question that researchers, enthusiasts and scientists have been asking for many years.

Richard Peirce is probably the main record keeper, and leading investigator of this issue, and in the last 15 years has followed up on nearly 100 claimed sightings of Great White sharks around the British Isles.

Following investigation twelve sightings/encounters remain credible, however it is likely that some of these reports concerned the same shark, and when this is taken into account the number of possible sightings reduces to seven as listed below. 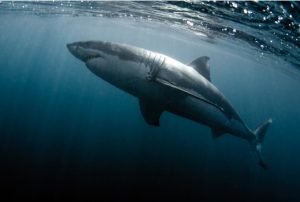 Full details of these and other possible Great White shark sightings have been published in Richard Peirce’s book “Sharks in British Seas” (available from Amazon, the shop on this website and leading book shops). A new book called “The UK Great White Shark Enigma” was published in May 2016. Details will be given to bona fide journalists, researchers and scientists on request. The real puzzle is not whether we have Great Whites in our waters, but why we don’t have more than possible occasional vagrant visitors. Broadly speaking the conditions off several places on Britain’s coasts are very similar to those found in South Africa, southern Australia, California and New England etc. where there are established Great White shark populations. Richard Peirce is convinced that we get the occasional vagrant visitor, and the nearest proven and recorded Great White shark to our waters was a female caught in 1977 off La Rochelle in the northern Bay of Biscay. The catch site of this shark is 168 nautical miles from Lands End.